It All Began With Drip-Drip Questions and Answers

It All Began With Drip-Drip Questions and Answers: The tiger took shelter near the house (i) an old woman (ii) an old man (iii) a neighbour..... 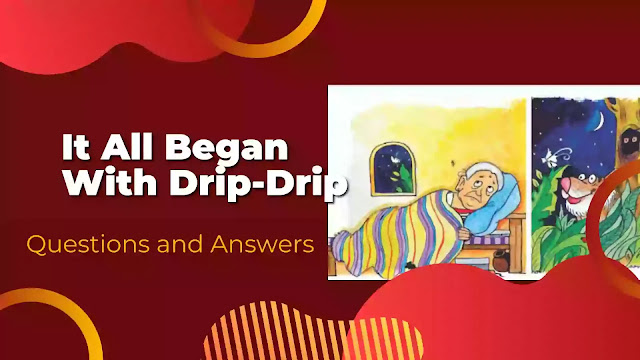 It All Began With Drip-Drip Questions and Answers

(a) The tiger took shelter near the house (i) an old woman (ii) an old man (iii) a neighbour.

(c) The tiger thought drip-drip was (i) the constant falling of rain (ii) the name of a man (iii) a creature.


Rearrange the following sentences In the correct order and put the numbers in the given boxes. One is done for you:
Activity-3

What do you think would Bholenath’s reaction if he knew that the animal ‘huddled in the dark’ was actually a tiger?

Ans: I think if Bholenath knew that the animal ‘huddled in the dark’ was a tiger, then he would never go to him to catch it. He would scream in fear and run away into his home to save his life. Or he would call his neighbours to drive the tiger from their village.


Complete the following sentences with information from the text:
You may want to read this post :
Activity-5

(a) Why did Bholenath bring the tiger home?

Ans: In the dark night, Bholenath thought it was his donkey so he bring the tiger home.

(b) What made the neighbours come running out of their huts?

Ans: In the morning, when Bholenath’s wife discovered a tiger tied to the tree and she screamed in fear. Hearing her sound, the neighbours came running out of their huts.

(c) Why were the villagers relieved?

Ans: The villagers were relieved because the tiger had chewed through the rope and ran away to the jungle.

(d) How did the king reward Bholenath for his bravery?

Ans: The king made Bholenath the commander-in-chief in his army and also gave him a huge house to live in.


Write ‘T. for true and T. for false statements in the given boxes. Give supporting statements for each of your answers:

(a) Bholenath did not know how to ride a horse. [T]

Supporting Statement: I do not even know how to ride a horse.

(b) The king sent Bholenath a magnificent elephant. [F]

Supporting Statement: In the morning, the king sent Bholanath a magnificent stallion.

(c) The enemy soldiers were happy to see Bholenath. [F]

Supporting Statement: The enemy soldiers were astonished to see a wild-looking man tied to a fierce stallion.

Supporting Statement: Everyone was amazed that he had defended his state all by himself against eight thousand enemy soldiers.

(a) Why was Bholenath full of despair?

Ans: Bholenath was full of despair because the king gave him the duty to protect his state from enemies. He even did not know how to ride a horse.

(b) How did his wife help him to overcome his trouble?

Ans: His wife said don't worry, I will tie you to the horse.

(c) What made the enemy soldiers greatly scared?

Ans: The enemy soldiers were scared to see a wild-looking man tied to a fierce stallion, waving branches excitedly. They think this must be a great warrior who comes single-handedly to defeat them.

(d) Do you think Bholenath could truly be called a legendary character? Give reasons for your answer.

Ans: No, I do not think Bholanath could truly be called a legendary character. Because it all happened because of his luck.

It All Began With Drip-Drip Questions Answers


Read the following sentences. Underline the Nouns which indicate either a state of being or a quality of mind:
Activity-8(b)

Please do not enter any spam link in the comment box.